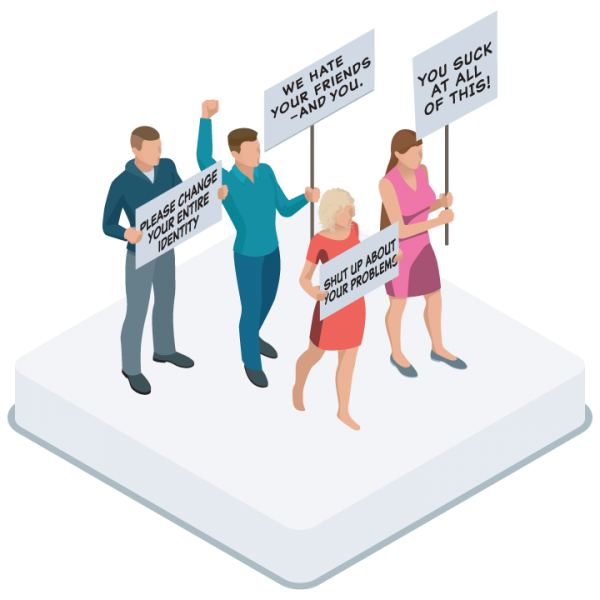 Campbell is a professor of marketing and social psychology at the University of Oregon, who researches how social change occurs.

Many people change their attitude on a subject and become activists not so much by rational argument but by what their friends think and do. Having a supportive friend is a great motivator. People are influenced most by their friends and family. This is why it has been so important for the gay rights movement that LGBT people come out openly. Then their relatives and friends see them as individuals they love and respect, so they will often change their attitude about the subject in general.

“The greatest influence on people is other people …. It comes down to the question: Are my friends doing this? … To get someone involved, include them in group photo-ops, in team metaphors, and other social media, showing them answering ‘Which kind of person are you?’ quiz questions. You are constantly reminded that your friends are supporters of this issue. You want to like it because it is a way you can connect with your friends’ passions.” [p. 37]

Besides friends, people are often influenced by celebrities they admire, so this is why it is important to get admired celebrities to speak out in favor of our issues.

They may also resist the idea because they feel that the path to that goal may be difficult and may be unpleasant. People have a tendency to resist or even deny a problem when they do not like the solution to the problem.

Successful movements “make the person feel that they are the type of person who wants to get involved, by appealing to their sense of self. They hit the self-force hard by showing how you already love the issue in some inner way, and, thus, you need to join the movement to express that. The effective message reads ‘This isn’t just awesome, it is who you are.’ It follows the marketing tactic of simply telling people that they already are the people we want them to be. This works well because, as humans, we tend to choose items that are consistent with our sense of self, that we feel we are already talented at, and that seem to have some sort of fit with us. So instead of saying ‘you should join us’ they simply say ‘you are already a person who is part of us.’ ” [p.36]

Successful movements “make appeals to a person with familiar references and identity-compatible moments to show you that the issue is part of the true you. Joining feels like the authentic, correct choice. If this is who you are, why would you not agree?” [p.37]

On the contrary, “Lots of activist movements push the button in the opposite direction. These activist movements more or less say to outsiders, ‘Hey, assholes, you suck at this, so you need to change your entire sense of self and get good at this thing that has nothing to do with you …. No one likes to play a game they are the worst at, especially a game they get scolded for being bad at. For instance, if you are not good at playing or understanding soccer, you don’t play or watch soccer. Even worse, you might go further and degrade the very value of the sport of soccer …. Thus, if someone does not feel part of the group, even if you can convince someone of a fact, it may not alter the ultimate higher-level belief. They may even go so far as to repeat a lie. Lies can send a signal of what team you are on. Lies have a social function that can sometimes be rewarded.” Sometimes a confrontational approach can work to change people, but often it does not. A more effective approach is to show empathy for that person, to get them to change their identity from that team to your own team. [p. 37]

Besides appealing to a person’s sense of self, “the other question affecting people is ‘What will the people in charge think of me?’ It is important to create a caring environment, to welcome all by saying that everyone has a bit of this inclination in themselves. An attractive force is for a person to think, if my friends or people I want to be friends with are doing this, then I should do it too. Public campaigns that indicate most people like you follow this norm, or are changing to start following this new norm, can be largely influential as well …. A campaign needs to make it seem like this is an important issue with normal beer-drinking, grilling, shaving men. In an ideal world we would not need ads to help with social justice, but we live in a very unideal world. And in this unideal world, things such as imperfect ads are needed in the nuanced equation toward a better society. ” [p. 38]

“For repelling forces, the thought process can be: my friends won’t accept me if I get involved with this, so I won’t get involved …. One other way people might be repelled by activism is by the feeling that the activist leadership will not accept them. People may worry that even if they attempt to change their behavior, the activist elites will still be unaccepting of them because of some past behavior …. Good inclusion training often follows a ‘Welcome to Team Hero’ logic, in which the idea is that everyone in the room (including many who are feeling very threatened) is described as already, or after some training, on the Team Hero of inclusion. While this approach may not work in all situations, in many situations it is worth considering because it is backed by research.” [p. 38]

“Notably, many religions are effective at recruiting people in ways that other groups are not. They will immediately accept outsiders who want to be insiders along the lines of: ‘Congratulations! You confessed your sins; Welcome to Team Christian! Here is the guidebook. Our small study group meets on Wednesdays, and always remember Jesus loves you, and we do too.’ That common phraseology of ‘Jesus loves you, and we do too’ is a very effective ‘Welcome to Team Hero.’ To let people feel part of the team quickly, give them some expertise, such as being assigned to teach a particular subject to others on the team, or some other way they can immediately contribute to the cause, depending on their individual background. Give them a ‘membership card’ of some sort, or an ‘I was there’ souvenir. For example, have a newcomer write their own message on a stylized poster, and then take a photo and post it on the group’s website. Publicly showing support for a cause solidifies that support.

“Lastly, show care. If you want anyone to care about your critical message, you need to first demonstrate that you care about them. If you do not do this, the newcomer may think that activists care little about them, or look down on them as morally inferior. When you do not start with care, it often leads people to assume a level of hostility about you that is not true. Even if you are offering a message of criticism, it is important to also convey that the campaign has concern for the group they are accusing of wrongdoing. Showing concern for those we criticize may go a long way in promoting social change.” [p. 39]

“Take extra time to be nice to those who are ignorant, biased, or wrong…. Remember that today, you are less ignorant, biased, and wrong because someone who was not yelling at you helped you get there. Maybe you got there because, first, someone yelled at you and really shook you up. But on that path to truth, someone else with whom you wanted to be friends also came along with a ‘Welcome to Team Hero,’ a fix to your solution aversion, or a message that started with care.” [p. 39]

All these factors are important for activists to keep in mind, when attempting to persuade others of the rightness of their campaign, and to attract others to join as activists. That is how campaigns for change reach success.