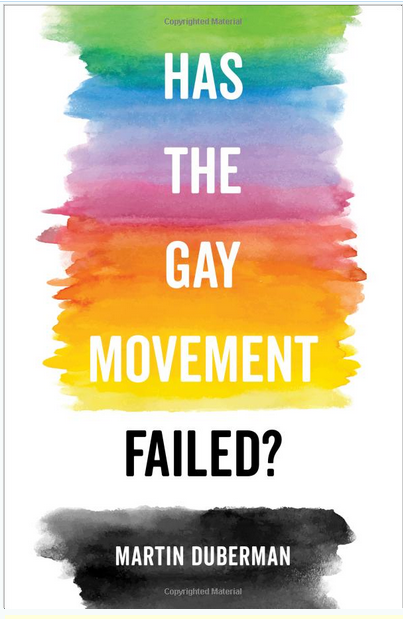 Martin Duberman, Has the Gay Movement Failed? University of California Press, 2018. Dr. Duberman is Distinguished Professor of History Emeritus at the City University of New York, where he founded and directed the Center for Lesbian and Gay Studies. He was a finalist for the Pulitzer Prize, recipient of several Lambda Literary Awards, and honored with the Lifetime Achievement Award from the American Historical Association. He is the author of numerous historical biographies, of his own multivolume autobiography, and of pioneering texts like About Time: Exploring the Gay Past (1986), Hidden from History: Reclaiming the Gay and Lesbian Past (1989), and Stonewall (1994).

Below are some quotes from Has the Gay Movement Failed? – an important text.

p. 6 – A 2013 report by the centers for Disease Control found that 41% of high school students admitted to having had sexual intercourse. Another survey showed 42% of persons below age 19 had sex. Previous studies found even higher rates.

p. 22 – Carl Wittman, “Gay Manifesto” pamphlet in early 1969 (a month before the Stonewall riots) sponsored by the Gay Liberation Front, “remains in both style and argument the most resonant piece of writing … from the GLF period.”

p.25 – quote from Wittman: “Kids can take care of themselves, and are sexual beings way earlier than we’d like to admit…. Those of us who began cruising [for sex] in early adolescence know this, and we were doing the cruising, not being debauched by dirty old men.” Wittman decried society’s condemnation of sex by young people, saying that any harm caused by early sexual experiences is “undoubtedly less dangerous or unhealthy than is tobacco or alcohol.”

p. 78 – In GLF chapters of the early 1970s, “the burning – and most controversial – question related to age-of-consent laws. In approaching that issue, I start with a simple question. Did you have sex before you were sixteen? You did?… Almost all states have laws on their books that establish the legal age of sexual consent at 16.” He recognizes that determining which age is appropriate for sexual consent is a “thorny question” (p. 78) which can be an “endlessly debated conundrum” (p. 80). On pages 78 and 89, Duberman makes a strong critique of laws that forbid teenagers to have sex with each other, and he condemns imprisonment and sex-offender registries for such persons. He does not give explicit support for the right of prepubescent children to engage in bodily pleasure (though he does question that it is always wrong), but he does defend intergenerational relationships by citing other cultures (like the Berbers of Siwan Oasis in Egypt), where such relationships were common and socially accepted. His main point is that early gay liberationist organizations debated and defended such relationships, whereas current LGBT activist groups have completely abandoned the question of sexual rights for young people below age 16.

p. 109 – Duberman makes numerous references to the injustices of the American criminal “justice” system. He cites approvingly the work of Dean Spade, founder of the Rivera Law Project and a professor at the Seattle University School of Law. that “opposition to the justice system should include strenuous opposition to prison expansion. Currently, there are some 2.3 million people in our jails; we lock up more citizens than any other country.”

p. 110 – “Mainstream gay organizations have played almost no role in the resistance to hiring more cops, building more jails, criminalizing more behaviors, and lengthening more sentences – though many gay citizens are suffering from the consequences.”

p. 111 – Duberman “urges a shift of attention from jailing ‘sex offenders’ to making greater efforts to work against the social violence of everyday life among the most vulnerable among us – children, say, or trans people – and to providing direct support, for example, to homeless queer people and those subject to deportation. As our prison system stands, it doesn’t help prisoners, many of whom are incarcerated for minor offenses (like being caught with a little pot), and it apparently doesn’t make the rest of us any safer…. Putting our energy toward promoting harsher sentencing takes it away from the more difficult and more important work of changing our culture.”

p. 173 – “Gay Liberation Front activists in 1970 staged several demonstrations in front of the [New York City] Women’s House of Detention calling up to the prisoners ‘Power to the sisters!’ and the prisoners calling back, ‘Power to the gay people!’ Even after GLF became defunct, other gay groups maintained the connection, as Regina Kunzel has written, ‘Political connections between lesbian and gay activists and prison inmates persisted as an important and under-recognized feature of the gay liberation movement of the 1970s. Many marches and demonstrations of the movement’s early years chose jails and prisons as rallying sites.’’ Cite: Regina Kunzel, “Lessons in Being Gay: Queer Encounters in Gay and Lesbian Prison Activism,” Radical History Review n. 100 (winter 2008): pp. 11-37.

p. 173 – “Gay activists also started a wide range of projects to draw attention to the prisoners’ plight, including publicizing brutal prison conditions, lobbying legal counsel, and [p.174] organizing pen pal outreach…. Some of the interactions between prisoners and activists became – for both – transformational. Both of Boston’s radical gay publications, Fag Rag and Gay Community News, ran free ads for prisoners and helped to run a prisoner book project.”

p.174 – Duberman posits a connection between the “politics of social control, control of bodies, and even control of desires” and the government’s enactment of mass incarceration. And he criticizes the national LGBT organizations for ignoring criminal justice reform but instead “pledging allegiance to the institutions of an unjust social order.”

p.175 – He suggests that homophobia is alive and well in America today, even among ‘enlightened’ liberals, in that it considers “the ‘sadness’ of lives that aren’t centered on family life and child-rearing. Being gay, in this commonly held view, is like being single – that is, second-rate, incomplete, not adult. Such lives are seen as stunted, abnormal, disfigured.”

p. 206 – “When the Supreme Court in Lawrence v. Texas in 2003 decriminalized sodomy, it did so only for consenting adults in private. Left unmentioned – and still criminalized – are those multitudes whose sexual lives do not match up with middle-class notions of morality, who do not regard matrimony, the child-rearing couple, monogamy, and the picket fence as the signposts not only of contented bliss but of mental health. For both gay and straight minorities whose sexual habits fall outside prescribed parameters – including teenagers below the age of sixteen who make love together, polyamorists, sex workers, practitioners of S-M, public sex, and open marriages – the sex offender registry, not the welcome mat, shadows their doorstep. In other words, the status of a wide range of sexual behaviors that do not fit the approved license that Lawrence v. Texas handed out to ‘consenting adults in private’ remains, in essence, unprotected – outside the law. And this is not theoretical. In some states the number of inmates incarcerated for ‘sexual offences’ is as high as 30%.”

Cites: Scott De Orio, “The Invention of Bad Gay Sex: Texas and the Creation of a Criminal Underclass of Gay People,” Journal of the History of Sexuality 26 n. 1 (January 2017).

p. 60 – In the late 19th century, there was more economic mobility in the United

States than in Europe, but by the late 20th century there was more mobility in Europe. “Unfortunately, the assumption that America offers more of a chance for people born into the lower class to rise has continued to hold sway while the reality has shifted. Today, 70% of people born into the bottom quintile in the United States never make it into the middle class. Yet the sloganeering about upward mobility continues, made more offensive still by the wage stagnation of recent decades and the resulting decline in the average American’s standard of living. [p. 61] As Michael Harrington wrote back in 1962 in The Other America the primary reason most people remain poor is that ‘they made the mistake of being born to the wrong parents’ – into families that faced built-in obstacles to advancement based on race, class, and gender. Those are the real forces that determine the nature of your journey through life.”

p. 179 – “Since the depths of the economic meltdown of 2008, the top 1% of Americans have gained 91% of the nation’s growth in income…. The combined wealth of the country’s four hundred richest Americans is greater than the bottom 61% of the population…. Some 43 million people in the United States – 13.5% of the population – are living in poverty…. A child growing up in poverty has a greatly reduced chance of getting a good education, a healthy diet, decent housing, a secure job, or the chance to save money for emergencies and retirement. Nor is the much-touted mobility of the American way a reality; we rank among the lowest among wealthy nations in the opportunities we offer for upward mobility. Oxfam reported in 2017 that just eight men, six of them Americans, now own the same amount of wealth as the poorer half of the world’s population – meaning more than 3.6 billion people.”

p. 181 – “By 2004, among 31 countries in the Organization for Economic Cooperation and Development, the United States ranked 25th in the overall security of its citizens.”

p. 182 – In the 1950s, when Americans were prospering, tax rates on the rich went as high as 90% (and inheritance taxes reached 80%). Since 1980, due to governmental policies favoring the rich, the unregulated financial sector steadily widened the gap between rich and poor. Today only half of Americans in their thirties earn more than their parents did at that age – though the real economy has doubled in size since 1980.

p.183 – “The share of total income that goes to the bottom half of the population has shrunk from 20% in 1980 to 12.5% in 2014. Concurrently, seven out of every ten dollars goes to the top tenth of the income scale, and the earnings of the top 1% have doubled since 1980. Put in dollars and cents, by 2014, the average income of half of American adults was around $16,000, while members of the top 1% brought home on average $1,304,800 – or eight times as much…. The tax code is so full of loopholes that the rich line their pockets – and avoid taxes – with ease (the wealthiest four hundred American taxpayers, each with annual income over $100 million, have of late been paying a federal tax rate – thanks to deductions that include such items as the cost of buying a private plane – of 16 to 22%).”

p. 184 – “In 2017 the U.S. Department of Agriculture released its annual report on hunger and food insecurity in the United States. Its conclusions are beyond shocking. The report classifies 41 million Americans as ‘food insecure,’ a figure that includes 13 million children who go to bed at night hungry – this at a time when the stock market has soared to unprecedented heights and the net worth of each of the four hundred wealthiest Americans rose by roughly $2.5 million.”