JoAnn Wypijewski, What We Don’t Talk About When We Talk About #MeToo: Essays on Sex, Authority, & the Mess of Life. London and New York: Verso, 2020. xxxiv+286pp. 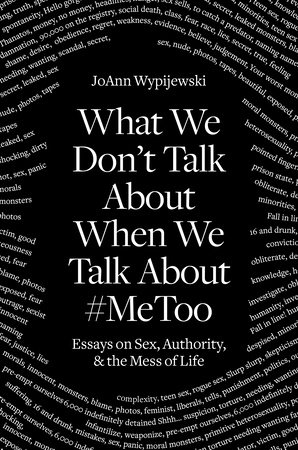 This highly readable collection brings together and updates some of the best journalism of former Nation editor JoAnn Wypijewski (pronounced “Vipichevsky”) over three decades, including essays relating to various sex panics, obsessions, and scandals that have gripped American media from 1992 to 2018. What most of these stories share is a rush to construct villains, typically but not always male, to act as scapegoats for the more complex, but unacknowledged social maladies that lie concealed underneath the media’s facile narratives of angelic innocence violated by incarnated evil. Wypijewski visits the multiple scenes of atrocity and gives us an anthropologist’s view of the local cultures that produce them, whether the Laramie, Wyoming, of Matthew Shepard and his killers, the decaying upstate factory town where a charming black drug dealer from Brooklyn was alleged to have knowingly infected a score of working class white girls with HIV, or the dusty Texas military town where Abu Ghraib’s “sexual sadists” were based and tried. With her, we see, hear, taste, and smell these places. In every case, she opens up to us a very different tableau from the formulaic monster/victim scripts that most reporters are content to mass produce in case after depressing case. Her rich narratives become vastly more interesting than what we thought we knew about the perpetrators and victims.

Unlike many reporters, Wypijewski never loses sight of her own subjectivity, framed by who she is and was as she grew up experiencing sex. She starts some of her essays with a brief autobiographical film clip. A girl raised in a working-class Polish Catholic family in Buffalo, she remembers how she had led her fellow Girl Scouts to walk out on a priest who tried to feel them up and engage in inappropriate talk, and has scant sympathy for the brand of feminist victimology that holds that all women and children become limply passive in the presence of male desire. As a young editor, she encountered and consented to the advances of a male intern, not much younger than her, but had to tell him that he could not be hired because of their relationship. This makes her wonder what the media narrative would have been had the gender roles been reversed. In frankly acknowledging her subjective positionality, she is far more honest than more conventional reporters who delude themselves with a false pretense to objectivity. Her sense of ambiguity and complexity comes from real lived experience as a sexual subject.

In almost every case, the real story is something other than the textbook demonization ritual celebrated time after time by the sanctimonious clerisy of mainstream media. The real story of Abu Ghraib was not the inhumanity of poorly trained low-rank soldiers or the naïveté of a not-very-bright hick girl from West Virginia, but a military culture of unthinking conformity and systemic torture encouraged by the U.S. government. Matthew Shepard’s death had nothing to do with homophobia, but everything to do with the drug-sated lifestyle of unambitious young men in a boring cowboy town; we now know that both Shepard and his killers were drug dealers who sometimes traded sex for more pharmaceuticals. The Nushawn Williams case in Jamestown, N.Y., is not just that of a reckless and narcissistic sexual player, but a milieu of casual unprotected sex (and drugs) that assumed HIV is not an issue for heterosexual partners who imagine they are in a “relationship.” Williams himself may very well have gotten HIV from one of these local girls. Woody Allen’s disgrace was not about child sexual abuse, but manipulative implantation of victim memories within a grossly dysfunctional family. The real story about Brett Kavanagh is not whatever may or may not have transpired between Catherine Blasey and him when they were both drunk teenagers, but his lack of intellectual curiosity about contemporary sexual politics and the consequences of the upper-middle class adolescent party scene in which they grew up.

The most famous priest scandal that won the Boston Globe a Pulitzer and the film Spotlight an Oscar had nothing to do with real child abuse in the Catholic church, and everything to do with a greedy personal injury attorney and unscrupulous psychiatrist who recruited mentally unstable patients to produce inconsistent and scientifically discredited “recovered memories” of weekly abuse that no one else present at the school had ever witnessed any occasion for. No one says anything about the psychological damage done by implanting false memories of horrific acts into the already disturbed minds of men desperate to find an easy explanation for all of their failures in life. The secondary story was the Diocese’s too ready acquiescence in paying out huge sums to illegitimate claimants, which only encouraged still more to come forward and board the gravy train, thereby delivering even more damaging stories about hundreds of victims and feeding the torrent of hate-filled anti-clericalism from “victim advocacy” fanatics like SNAP (Survivors’ Network of those Abused by Priests). Wypijewski attended Paul Shanley’s trial and extensively interviewed both Shanley and others involved in the case. Her sceptical investigative reporting definitively established Shanley’s innocence of the criminal charges brought against him. She concedes that the radical street priest who founded the Boston chapter of Dignity and championed gay inclusion against the disapproving Catholic hierarchy was a complex and imperfect human being. He violated his clerical vows by actively pursuing sexual relationships with some of the troubled young gay men and teens who sought his counsel in the 1960s and 70s; it is possible, although not certain, that some of the runaway boys he took in might have been younger than 16, the legal age of consent in Massachusetts. But there is no evidence that he was ever interested in pre-pubescent children or even had occasion to be alone with them, much less commit rape. Despite mounting scientific evidence against the credibility of any “recovered memory” testimony, which is now rejected almost universally in courts of every state, the Massachusetts Supreme Court refused to overturn Shanley’s unjust conviction. His story had become “too big to fail.”

Even as Shanley was the stereotypical sexual monster of the 2000’s, another even more odious monster emerged in the next decade in the persona of the repulsive Harvey Weinstein, whose downfall spurred the 2018 essay that gives the book its title. The media relished the image of the once wealthy and powerful film producer bent over his walker, publicly derided as fat, hairy, stinking of shit, with graphic descriptions of his deformed genitals broadcast to a world full of laughing haters. No one will deny that he engaged in bad behavior, but what we don’t talk about is the willing complicity of the many young actresses who either acquiesced to his crude advances or agreed to keep silent. In a Hollywood culture where the “casting couch” has always been a byword, ambitious young women sometimes compromise their moral purity by consenting, however reluctantly, to sex with ugly and obnoxious men, seeing it as a necessary and temporary sacrifice, at least until a personal injury attorney helps them monetize it even more by saying they didn’t fully consent on one or two occasions. There is much else we don’t talk about, such as sex panic, vengeance, Schadenfreude, due process, and the serious social costs of criminalizing all but a strictly regulated menu of permissible sexual and romantic behaviors.

For an hour-long interview of Wypijewski by Canadian “Femsplainer” Danielle Crittenden and the libertarian journalist Emily Yoffe, listen to the podcast at https://t.co/6O8ZDzXV7R. It is always a relief to hear independently minded sex-positive feminists, whether of the left or right, who reject the paternalistic construction of ubiquitous female victimization and weakness, itself a sexist stereotype that is arguably even more toxic to women themselves than to the men whom we so love to damn as serial predators. Theirs is a feminism of strength and self-confidence in dealing with men, not whining self-pity. They recognize that sex and desire are inherently messy and often disappointing, rarely Platonic ideals of perfect egalitarianism that can be hypostasized into a legally obligatory conformity.