The William A. Percy Foundation is pleased to announce Canadian-based scholar, polemicist, and artist Ryan Conrad as recipient of the Foundation’s 2021 Charley Shively Prize for Gay Liberation. A co-founder of the publishing collective Against Equality, Conrad is currently Adjunct Research Faculty in Women’s and Gender Studies at Carleton University in Ottawa. Conrad’s wide-ranging, cross-disciplinary work – on topics such as the relation of sexual minorities to mass incarceration, the hijacking of social movements by a fundraising-focused nonprofit industrial complex, the economics of sex work in a pandemic, how dubious tropes about sexual and social hygiene shape immigration policy, to the straitjacket of “equality” as a holy grail for a politics of sexual difference – shows both a searching and uncompromising concern with justice and an unquenchable joie de vivre at the utopian potentials of erotic community, resonant with legacies of Walt Whitman or Harry Hay. 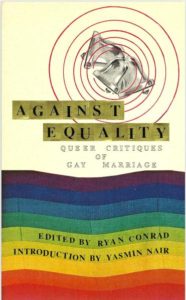 Conrad’s formal education is capped with a PhD from the Center for Interdisciplinary Studies in Society and Culture at Concordia University in Montreal, on top of an MFA in interdisciplinary studio arts from the Maine College of Art in Portland, where he had an unusual source of financial support: the city of Miami, Florida, which had paid Conrad settlement money after its police beat him unconscious while cracking down on 2003’s anti-Free Trade Area of the Americas protests.

Conrad grew up in a small mostly Catholic town in Rhode Island, the youngest among four siblings, in the “markedly homophobic and pre- / proto-internet ’90s,” a context where “a fag was the worst thing a boy could be, and I was going to die of AIDS,” he writes in an essay in Mattilda Sycamore’s Between Certain Death and a Possible Future: Queer Writing on Growing Up with the AIDS Crisis. Aside from some fondly recalled escapades with fellow Boy Scouts at camp, “No one taught me anything about being queer until I was in my twenties.” Attending a conservative college in Maine barely helped. “Thankfully, Emma Goldman, punk rock, and movies saved my life,” he writes, “Punk rock for not only giving me a sense of what’s possible through collective organizing and shared passions but also calling out limitations. Punk also showed me that I didn’t have to be a boring, rainbow-flag waving pink-dollar consumer like the boys of Queer as Folk and Will and Grace.” A world of homoerotic cinema, suddenly available through Netflix’s then new DVDs-by-mail service, offered an education in gay visual culture with a depth of offerings far beyond the local Blockbuster Video. 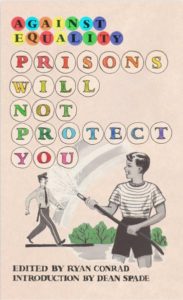 After college, Conrad joined an informal, mostly queer small-town Maine collective household, which helped pull together local resources, such as a youth drop-in center and HIV and STI prevention, drag show fundraisers, and even ran an AIDS walk. But the only older mentors tended to be lesbians, Conrad found – such was the decimation even in small-town Maine from the epidemic. Conrad interviewed the retiring owner of Lewiston, Maine’s now-shuttered, former gay bar. “Mid-interview he made me turn off the video camera and wept while describing what it was like to lose bartender after bartender to AIDS and what loss on that scale meant for gay men like him living in small cities and rural towns. I didn’t realize what kind of trauma I was prodding.”

For his MFA project, Conrad worked closely with James Wentzy, a Manhattan video artist and long-term HIV survivor, whose basement apartment was a trove of archival material documenting the pivotal first wave of AIDS activism in the 1980s and 1990s. Out of this immersion in material at that point still little systematically explored, in 2011, Conrad produced a short film, Things Are Different Now, which played at MIX NYC and other festivals throughout North America and Europe. 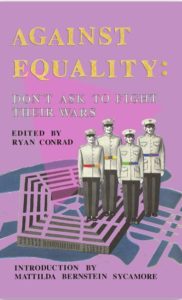 Conrad is perhaps best known – or most notorious – in the GLBT community for Against Equality, which he co-founded with Chicago-based writer and activist Yasmin Nair. This publishing collective and online archive has pushed against the grain of what’s become mainstream, money-driven GLBT organizing by questioning the pedestaling of projects such as same-sex marriage and U.S. military inclusion in lieu of broader issues of social and economic justice and criminal justice reform that disproportionately impact those on the sexual margins along with other disparaged minorities. Why should the fluidity and scalar reach of queer erotic community – historically bases of communal strength and organizing potential – be bound and pigeonholed into matrimony? How can a movement ostensibly interested in freedom and liberation be oblivious to the global death toll from U.S. imperial adventurism? Why should access to health care or financial security in old age be a function of partnership status? A push to ape heterosexual institutions in a one-to-one correspondence takes identity politics to the absurd limit of identicalism, Against Equality contends, and betrays the potentials engendered from sexual difference.

“We want to be sure that voices of resistance are not erased and written out of history,” Conrad writes. “These pieces in our archive are like bread crumbs, laying out different pathways to justice and resistance for those that dare to imagine a more just world. When people look back on these desperately conservative gay times, we hope our collective voices can be an inspiration to those who come after us – those that look to our queer histories, just like we did, as a site of rejuvenation, excitement, and hope.”

Conrad is the editor of the collective’s anthology series, compiled in Against Equality: Queer Revolution, Not Mere Inclusion (2014). He has contributed as well to several anthologies, such as Queer and Trans Migrations (2020), Decolonizing Sexualities: Transnational Perspectives, Critical Interventions (2016) The Gay Agenda (2014), Queering Anarchism (2013), and After Homosexual (2013). His writings have appeared in American Quarterly, Women Studies Quarterly, Auto/Biography Studies, JumpCut, Canadian Journal of Film Studies, e-flux, Aparté, QED: A Journal of LGBTQ Worldmaking, Scholar & Feminist, Socialism & Democracy, Little Joe, UltraViolet, In These Times, and Fifth Estate. His work as a visual and performing artist has exhibited internationally in Europe, Asia, and North America.

“For me,” Conrad writes, “history has always been about understanding how we got to the very moment of the present we inhabit – to understand how we’ve survived, who our enemies and allies have been, which activist strategies have worked and why, what is made (im)possible through shared collective experiences and moods, how the queer political imagination expands and contracts to render certain futures viable and others impossible.”