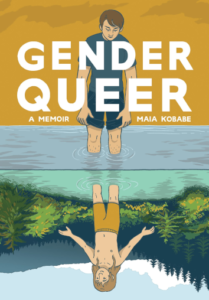 Few books oriented to young adults have aroused as much controversy or become such a flash point in the culture wars as Maia Kobabe’s graphic memoir Gender Queer. It is “graphic” not in the sense of featuring explicit descriptions of violence and sex (although there is a smattering of the latter), but in the sense of being a cartoon book. However, if one listened to the denunciations of this book by parents concerned to find it in their school libraries, one would imagine it to be a work of overt pornography designed to despoil children of their imagined “innocence.” It is clear that its critics have not taken the two hours necessary to read it, or they would realize that the book is in fact intensely sex-negative and has no agenda other than to present its author’s rather unusual development as a child, adolescent, and young adult.

Maia grew up in an idyllic rural setting in North Coastal California, where her hippie father taught at an alternative school. She did not learn how to read until she was 11, but then became a voracious reader, mainly of comics and fantasy literature. She loved playing with snakes, wore boys’ clothes, and could not understand why her teacher wouldn’t let her take her shirt off like the boys when playing at the river. Upon hitting puberty, she felt disgust at her periods and avoided using the restroom at school, cut her hair very short, and wanted to bind her budding breasts. She was severely traumatized by her first gynecological exam and resolved that she would never again allow anything to enter her body.

In high school, she had crushes on both boys and girls and told her parents that she identified as bisexual, but she was never physically intimate with anyone until she was 25. Her sexual fantasies centered upon being a gay man, and she stimulated herself by placing a pair of socks in her shorts and rubbing it. Later, she learned about the concept of “autoandrophilia” and immediately identified it as her “main kink.” However, she did not regard herself as a boy any more than she did as a girl. Her progressive high school’s sex education curriculum put a heavy emphasis on anatomy, pregnancy, sexually transmitted disease, and eventually sexual consent; she found it all off-putting and repulsive, but nevertheless enthusiastically joined her school’s Queer Students Alliance. She never dated anyone until graduate school, turning down multiple opportunities, and justified it to herself even then as a “research” experiment so that she could write about sex in her graphic fiction. After being shown how to use Tinder by one of her friends, she found a young lesbian who worked at a sex toy store, with whom she indulged her fantasy of performing gay male sex by wearing a strap-on dildo that her date fellated. This gave her no pleasure at all, nor did any of the autoerotic female sex toys, so she henceforth resolved to date no one and identified as asexual. She decided to let a co-author write all the erotic parts of her fiction rather than doing any further “research.”

She was also uninterested in taking hormones or any steps toward actual gender transition, although she says she wishes she had known about puberty blockers when she was younger and still fantasizes about top surgery to have her breasts removed (although she apparently has not yet done it). Just as she wants sex to play no role in her life, she also wants gender to play no role, since she presents as neither male nor female. Her greatest excitement seemed to be in discovering and claiming e/em/eir as her (eir) favored pronouns, since even they/them/their are too conventional. E simultaneously rejects all sexual and gender identities and is obsessed with proclaiming eir own unique positionality by forcing eir interlocutors into adopting eir invented Newspeak. 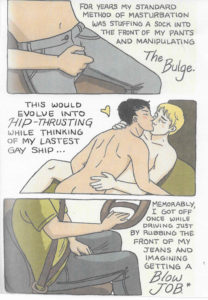 The book has been unfairly condemned as sexually explicit because of a small number of cartoon frames that conservative media have pulled out of context and relentlessly reproduced, thereby giving them far greater distribution than they would have ever had on their own. Page 61 features a mastubatory fantasy she had of two naked boys kissing and rubbing against each other, in other words imagining a kind of sex she can never have in reality. The frame that critics call “a man molesting a boy” (p. 135) is actually a Greek vase painting that she dreams about after reading Plato’s Symposium. If seeing this is harmful to minors, we had better keep them out of art museums. The notorious frames of oral sex on p. 167 are not really oral sex, but her lesbian friend going down on Maia wearing a strap-on dildo; anyone who bothers to read the text sees that this was a disappointment to Maia. All of these scenes are imaginings of sex, not real sex. Any parents who think that their teenage children do not have such fantasies or have never seen far more explicit videos of actual sex online are deceiving themselves. No adolescent’s “innocence” is going to be violated by seeing a cartoon about another adolescent who has sexual fantasies. Recognition that other adolescents, even very repressed ones, also have such thoughts can only be reassuring to them.

The conservative critics who want this book pulled out of school libraries because it promotes transgenderism and gay sex have clearly not read it. Maia Kobabe is neither transgender nor gay, but offers confused young people another way: total erasure and rejection of sexuality and gender. Arguably, this may be preferable to the irreversibility and life-long medical interventions of actual gender transition, with all its attendant risks and complications. Whether non-binary asexuality will lead young people to ultimate happiness is a question we cannot answer in this short review, but we should acknowledge that it is a path a growing number of them are taking, despite a more sexually tolerant society than we have seen in any previous decade. No child could ask for parents or a school that were more progressive, open, and accepting than Maia’s, yet the result in eir case is dismissal of all sex and gender, as if e is sick of hearing about both. In a curious way, Maia Kobabe’s ideal is very much like what the social conservatives themselves want for adolescents: no acknowledgment of pubertal changes, no sex, no gender reassignment, nothing but a state of suspended animation in pre-lapserian innocence, childlike regression without end.

The real reason it should be pulled out of school libraries is that it is not a very good book, despite the award it received from the American Library Association. I can think of hundreds of books, including many dealing with GLBT topics, that are far more deserving of the limited shelf space and would do more to teach students the skills of critical thinking and elegant expression that used to constitute the sine qua non of a quality education. We can do better than supply high schoolers an emotionally self-indulgent memoir of an otherwise unknown individual that contains no thought or sentence of more complexity than can be expressed in a cartoon bubble. Young people get enough ME-ME-ME-ME-ME from the constant barrage of social media they consume day in and day out. That librarians and educators think they won’t read anything more challenging than appealingly illustrated cartoons presented under the aegis of diversity and inclusion is yet one more sign of the cultural infantilization that undermines their capacity to grow into functional and literate adults.