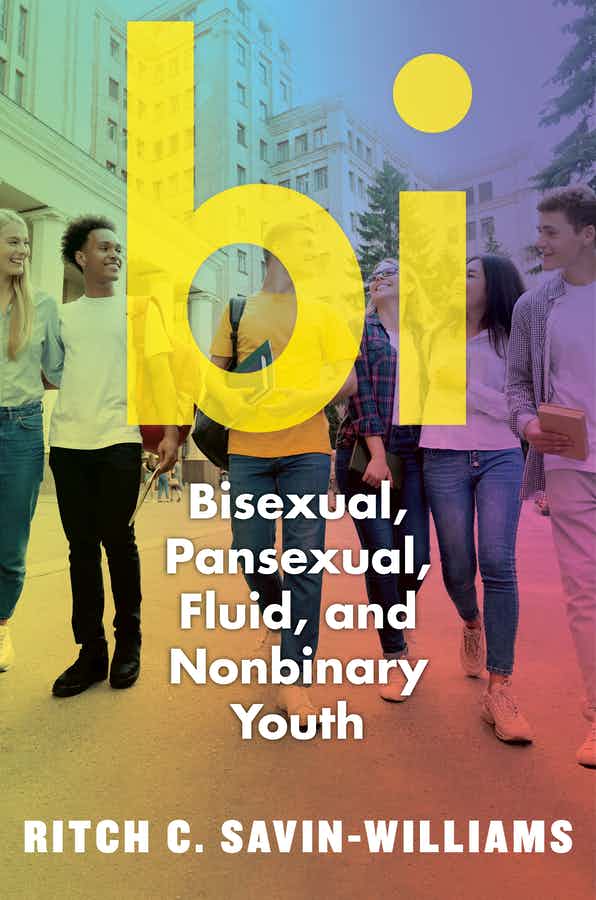 The Cornell developmental psychologist Ritch Savin-Williams has produced over the last two decades a series of important books on gay teenagers and their experiences of negotiating sexual self-actualization. However, anyone who deals with the sexuality or gender performance of young people today is increasingly aware of their resistance to neat categorization by traditional labels and essentializing narratives. At the same time that identity politics has become hegemonic in media discourse and established organizational structures dominated by previous generations, young people in their teens and twenties are pushing back against this ideological rigidity and pointing the way toward what could be called a “post-identitarian” era that recognizes the polymorphous complexity of individual personality and self-fashioning. For those of us who grew up in the last century, chafing under the tyranny of labels and their attendant expectations, this development should be welcomed and help us deconstruct the inherited conceptual archaeologies that have too often yoked us to self-imposed limitations.

Although LGBTQQIA+ organizations nominally include “bisexuals” within their alphabet soup, and virtually all population surveys show that bisexuals greatly outnumber their other constituent categories, few of the leaders of these organizations would identify as bisexual and the distinctive challenges of bisexual life receive little attention from them. In part, this marginalization is due to the very nature of bisexuality as an anti-identitarian phenomenon within organizations that depend on identity politics for their funding and visibility.

One of the problems Savin-Williams acknowledges throughout his book is the very inconsistency of how “bisexual” is defined in previous research. He argues for the widest and most inclusive window: those who self-identify with the term “bisexual” are fewer than those who actually have physical encounters with both sexes, and those with experience are fewer than those who have had attractions to both sexes. Many previous researchers have classified as bisexual only those who might rate as an equally balanced Kinsey 3, or perhaps a Kinsey 2-4, whereas Savin-Williams believes that only Kinsey 0’s and 6’s should be excluded from the bisexual umbrella. Traditional research methods also fail to capture the fluidity of sexual preferences: an individual who rates as a Kinsey 0 at the time of a survey might at some past or future stage of life be a Kinsey 1 or 2 or higher. In addition, sexual preference per se should not be the only criterion: Savin-Williams’ case studies include more than one example of individuals whose sexual history is mostly with one sex, but whose romantic preference is entirely with the other sex. Savin-Williams estimates that the most inclusive measure of bisexuality, recognizing all these permutations, might be as much as one-fourth of the adult population.

Savin-Williams is well aware of how unsatisfactory the bisexual label is, inasmuch as it is eschewed by many young people themselves, who prefer terms such as “pansexual,” which refers to a complete indifference to the gender or sex of one’s object choice and would include attraction to individuals who do not conform to the gender binary. This term is not synonymous with bisexual, as many bisexuals distinguish sharply between what they value in male and female partners, but Savin-Williams does consider all pansexuals to be bisexual in that their attractions include both male and female. As he explains (p. 114), “… pansexuality has become for some youths and young adults a self-chosen recalcitrant and insubordinate identity, largely because it is sufficiently vague and all-inclusive so as the deliver no information to those who ask inappropriate, invasive gender or sex questions. As such, ‘pansexual’ is transgressive, a placeholder for those who are unlabeled, questioning, not sure, and none of the above and those who defiantly resist being boxed in by convention.” Although he does not discuss it, the term “queer” (letter Q in the alphabet soup) has come to function much the same way for other young people.

Others who are actively exploring or experimenting would call themselves “fluid.” A substantial number of young people, particularly those with limited sexual experience, respond to surveys with answers like “Unsure” or “Don’t Know.” Others simply prefer to “pass” as heterosexual, because it raises fewer issues for them. Yet others refuse to answer the question at all. Savin-Williams believes these should also usually be counted within the bisexual rubric, which he regards as an expansive umbrella category rather than a single, uniform identity or experience: “bisexual” simply means not exclusively heterosexual or exclusively homosexual. Hence his belief that bisexuality is always undercounted in most sexual preference surveys.

As in his earlier books, Savin-Williams’ method is to combine synthesis of previous quantitative studies with his own qualitative interviews of mostly college-age young people. The quantitative studies, despite the definitional limitations discussed above, reveal much of interest. It has long been known that women are more likely to identify as bisexual than men, perhaps because of the greater stigma attached to male homosexuality as opposed to female-on-female sex (which many straight men regard as a turn-on). In one survey (the National Survey of Family Growth), 19% of women and 8% of men reported some level of attraction to both sexes, and in another (Add Health), 14% of women and 5% of men reported sexual behavior with both sexes.

More surprising is the generational divide. According to a 2020 Gallup survey (https://news.gallup.com/poll/329708/lgbt-identification-rises-latest-estimate.aspx), 11.5% of the population born since 1997 self-identify as bisexual, compared to 5.1% of those born 1981-96 (so-called “Millenials”) and only 0.3% of the Boomer generation and older (born pre-1965); in contrast, the increase in gay or lesbian self-identification was far less dramatic, so this cannot be explained simply by lower social stigma. It is unclear whether this trend is due to older individuals who may have been bisexual in the past settling into a more fixed orientation as they age or to the greater historical saliency of bisexuality as a concept during younger people’s period of identity formation (since the 1990s).

In an interesting chapter, the book explores the distinctive challenges of bisexual youth from different racial backgrounds. A small sample of sexual minority youth published by Haltom & Ratcliff (Archives of Sexual Behavior 2020) suggests that African-American youth were later than other races in labelling or disclosing same-sex attractions (age 17-18), but the earliest in having actual same-sex experiences (average age of 14). Theologically driven homophobia and black nationalist hypermasculinity both play a role in deterring even self-recognition of a gay or bisexual identity, such that many African-American men who are behaviorally bisexual on the “down low” refuse to acknowledge that they are anything but heterosexual. The same phenomenon has been observed among African-American prison inmates who are situationally bisexual. Young African-American women have been shown to be twice as likely as their white counterparts to engage in same-sex relationships (p. 186), driven in part by the non-availability of male partners due to mass incarceration or desertion after the birth of children. Latinx and Asian-American youth also display distinctive patterns of sexual awareness and activity due to unique cultural factors, especially when their families retain the patriarchal values of the countries from which they emigrated.

The book makes a stab at treating the subject of gender variant youth, many of whom can be considered bisexual to the extent that their gender identity changes over time, even if their sexual preference remains stable. This discussion is not altogether satisfactory and should really be the subject of another book, which I hope Savin-Williams will write. I would suggest that nonbinary, genderqueer, and gender fluid youth stand relative to transgender or cisgender youth as young people on the bisexual, pansexual, and queer spectrum stand relative to exclusively gay or straight youth, but this is not an analogy Savin-Williams dares to make, perhaps due to fear of offending trans sensibilities. Transgender ideology relies on the same dichotomous essentialism as gay/straight identities did prior to the interventions of queer theory. This is not at all the same thing as the colorful gender expressionism and experimentation of the mostly gay, lesbian, and bisexual young people who reject extreme medical interventions based on exaggerated stereotypes of masculinity and femininity.

Savin-Williams introduces the concepts of toxic masculinity and femininity as foils to the discussion of gender variance. Again, this is a discussion that deserves a book of its own with reference to contemporary youth. Although toxic masculinity is described in a fairly conventional manner, I do not think toxic femininity is adequately identified. Savin-Williams sees it as a complement to toxic masculinity by presenting women as excessively submissive, passive, and domestic. Women who adopt that posture may well be toxic to themselves, but the more socially toxic form of femininity today is quite different. The impulse to domination and control of a subordinate partner, emotional coldness, and aggression that defines toxic masculinity is not unique to men. There are many couples in which the female partner is the primary bread-winner or emotionally dominates a weak and feckless male partner. Toxic behaviors that one not infrequently observes among young women today might include attention-seeking on social media, playing the victim when one is not a victim, vindictiveness, gossip, ridicule, false accusations of sexual impropriety, cyberbullying, etc. These may not involve physical violence against their victims so much as verbal and social aggression, but they do create victims nevertheless.

The book is most engaging in its narratives of individual case histories of the young people Savin-Williams interviewed, which illustrate a great variety of experiences. Some are still virgins in their early 20s, but others began sexual experimentation at very young ages. Several of the narratives of bisexual males recounted in Chapter 2 reveal sexual experimentation with other boys right around the time of puberty (or in some cases, like Donovan’s, much earlier). This was seldom seen as gay at the time, and some of these young men went on to identify as mostly heterosexual. But one does wonder whether early exposure to willing same-sex partners prior to solidification of an identity opens up doors to recognition of a later bisexual orientation. The issue of early sexual debut and its relation to bisexuality is something that deserves more systematic investigation.

In the past, bisexual males have faced stigma from both gay and straight. Gays tended to consider them dishonest, using heterosexual interests as a cover or in an inauthentic effort to conform with society’s expectations. Straight men would dismiss them as gay and promiscuous. Straight women would not knowingly date bi men out of concern that they were inconstant or secretive partners who might be infected with HIV or other diseases. Savin-Williams is optimistic that these stigmas are disappearing as non-dichotomous alternatives gain recognition and acceptance by a growing share of young people. However, his questioning of subjects does not seem to have included any items about the degree of disclosure of bisexual orientation to dating partners who were not bisexual. Is it still the case that 90% of bisexual men do not tell their wives or other opposite-sex partners about their same-sex attractions? How does this affect the depth and stability of their relationships? Knowing the answer to these questions is what will provide insight into just how far bisexuality is truly accepted by society at large.