Home» Who we are

William Alexander Percy (1885-1942) was the son of US Senator LeRoy Percy, owner of the 20,000 acre Trail Lake plantation near Greenville, Mississippi. He matriculated at Sewanee at the age of 14, spent a year in Paris after graduation, and then earned a law degree from Harvard. He served with Herbert Hoover on the Commission for Relief in Belgium in 1916-17, and was subsequently appointed by Hoover to oversee relief efforts during the devastating Mississippi Delta flood of 1927, an experience recounted in his best-selling memoir, Lanterns on the Levee: Recollections of a Planter’s Son (Knopf 1941). He published four volumes of poetry with Yale University Press, was the editor of the ground-breaking Yale Younger Poets series, was a godfather to the Southern Agrarian movement, and a friend of the gay African-American poet Langston Hughes and the Harlem Renaissance. A lover of younger black men, Percy offers a fascinating window into the intersections of race, class, religion, age, and sexuality in the segregated South of the 1920s and 30s.

William Armstrong Percy III was Professor of History at the University of Massachusetts, Boston, for over 40 years, specializing in classical and medieval history. A native of the Old South, he counts among his relatives prominent literary figures including William Alexander Percy (Lanterns on the Levee, 1941) and the novelist Walker Percy, as well as former governors and senators from Mississippi. He was valedictorian at Middlesex School in 1951, later enrolled at Princeton, and served in the US Army from 1953-1956. He received his MA from Cornell and his Ph.D. from Princeton (1964). Sexually active since the age of five, he turned his scholarly attention to gay issues in the 1980s, co-editing the Encyclopedia of Homosexuality with Wayne Dynes, co-authoring with Warren Johansson Outing: Shattering the Conspiracy of Silence (Harrington Park 1994) and Pederasty and Pedagogy in Archaic Greece (University of Illinois Press 1996), as well as significant work on Roman demography. He counted among his friends prominent sexologists Vern Bullough and C. A. Tripp, as well as gay activists including Jim Kepner, Dorr Legg, Larry Kramer, and Charley Shively. For recent projects of William A. Percy that the Foundation has supported, see here. For more about his interests and oeuvre, see http://www.williamapercy.com.

Thomas K. Hubbard is the President and Executive Director of the William A. Percy Foundation for Social and Historical Studies. Trained as a classicist with a MA from the University of California, Berkeley (1977) and a Ph.D. from Yale (1980), he has taught at a number of institutions including the University of Minnesota, Cornell University, and the University of Texas at Austin, from which he retired in 2021 as the James R. Dougherty, Jr. Centennial Professor of Classics. He is the recipient of many research grants and awards, including a fellowship from the John Simon Guggenheim Memorial Foundation in 2017-18. Among his many books are Greek Love Reconsidered (2000), Homosexuality in Ancient Greece and Rome: A Sourcebook of Basic Documents (University of California Press, 2003), Censoring Sex Research (Left Coast Press, 2013), and A Companion to Greek and Roman Sexualities (Wiley-Blackwell, 2014). For more on his landmark legal victory against political attempts to misrepresent and silence his scholarship READ MORE HERE …

Vanessa, Office Manager. Vanessa manages The Insiders’ Bookstore project for the Foundation, collecting and cataloguing book donations from the public, filling book orders from prisoners, and maintaining the Foundation’s mailing list. She started as a volunteer Student Intern with the Foundation in 2017, and after receiving her BA in Humanities at Chico State University, began to work for us in a paid position as the Office Manager. She is the daughter of a close-knit Central American immigrant family living near Los Angeles. 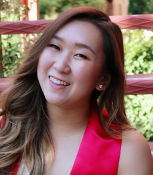 Ivana, Student Intern. Ivana received her BA in Criminal Justice from Chico State University in 2020, and has been working with us as a Student Intern during Spring and Summer 2020. In addition to helping Vanessa and Dr. Hubbard with The Insiders’ Bookstore project, Ivana has had the chief responsibility for administering our Spring 2020 research survey of prisoners concerning their institutions’ response to the COVID epidemic and the quality of prison health care they have experienced. She will also assist us with the writing of the final report on that survey. She grew up in a Chinese immigrant family in San Francisco, and has previously interned with the San Francisco Public Health Department and Sheriff’s Department. Her career goal is to be a forensic investigator.