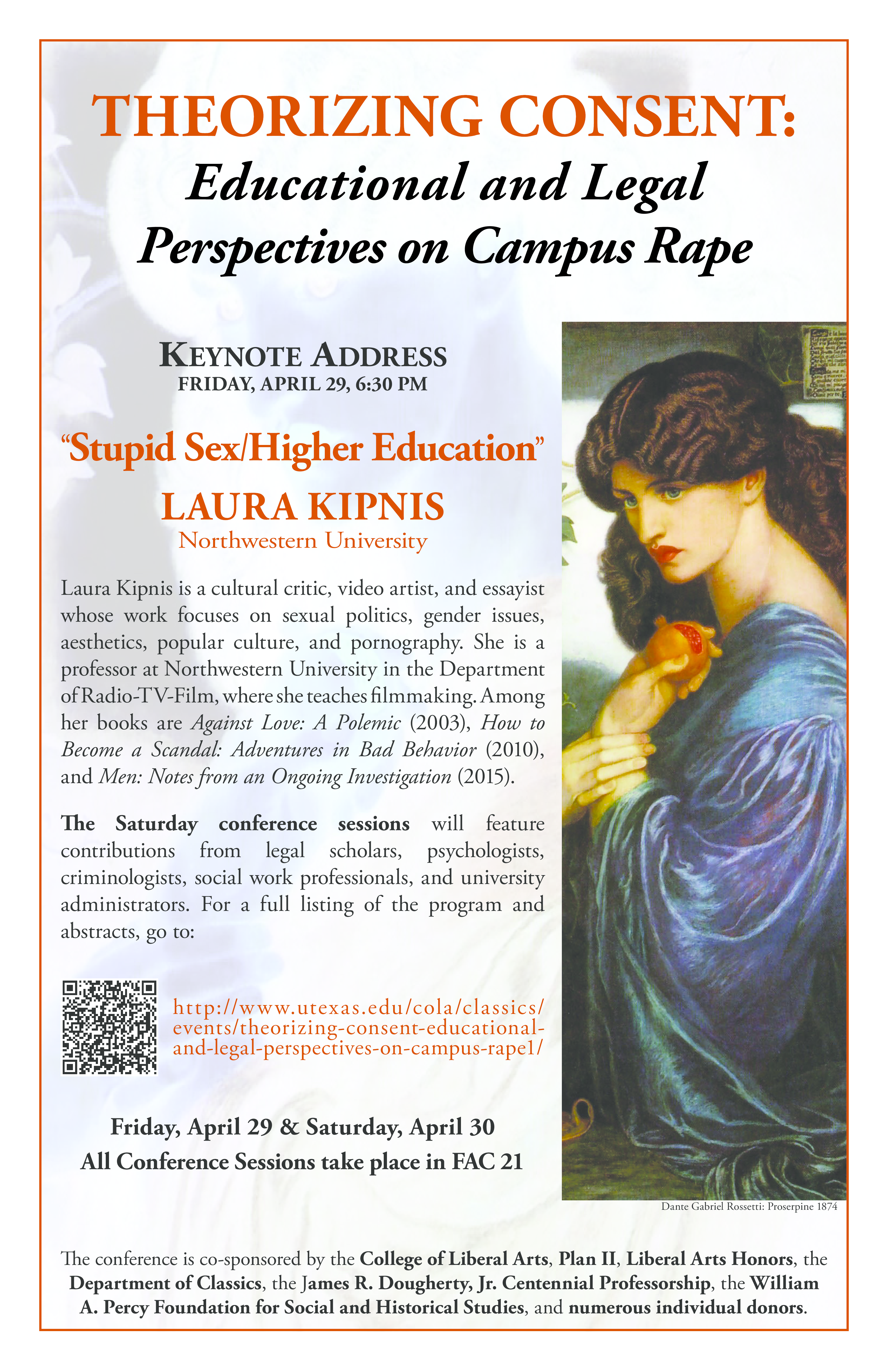 This conference aims to bring into dialogue scholars, administrators, social workers, policy experts, and legal professionals to interrogate the concept of sexual consent. US Department of Education guidelines for the implementation of Title IX, the Clery Act and the Campus Accountability and Safety Act now pending in Congress, recent legislation in California, and attention to “campus rape culture” in the media have thrust upon university administrators responsibility for policing student sexual conduct to an unprecedented degree. Pointing to well-publicized cases where students or fraternities were prematurely sanctioned for rapes that were later revealed not to have occurred, some have doubted whether university officials have been adequately equipped to investigate and adjudicate these issues. While acknowledging that sexual assault among students is a serious problem, others have questioned whether educational institutions should be required, as they are by the recent California law, to apply a strict requirement of affirmative verbal consent or “preponderance of evidence” standards that exceed the traditional criteria of criminal law. How does the ubiquity of alcohol and other intoxicants in student social life complicate assessment of consent, and should they be more stringently regulated in the interest of creating a rape-free environment? How should educational institutions best balance the rights of the accused with the need to protect victims from a threatening environment?

Scholars of gender and sexuality in the Humanities and Social Sciences have much to contribute to debates about the semiotics and parameters of consent. Should the responsibility of educational administrators to promote a rape-free environment on campus also extend to classroom educators teaching and discussing the ethics of sexual consent as encountered in history, literature, the arts, and social research? How can free and objective discussion be promoted in an environment of mandatory “trigger warnings” about material that some students might deem sensitive or objectionable in light of subjective experiences of trauma? Can international legal perspectives on rape and consent inform current American debates? Do practices of negotiating consent in subaltern communities, such as BDSM subcultures and anonymous gay sex venues, have anything to contribute to its mainstream articulation? How should any theory of consent protect the sexual rights of minors or those who are mentally impaired due to senility, illness, or other disabilities? In May 2015, the influential American Law Institute released a Model Penal Code recommending that the “affirmative consent” standard mandated for college campuses in the California law should be incorporated into state criminal statutes more generally. Does the enhanced policing of sexual conduct on campus therefore presage broader changes in the criminalization of sexuality throughout society? The conference aims to open interdisciplinary discourse on these complex and timely issues.

Links to videos of the conference are available here