Home» About the Foundation 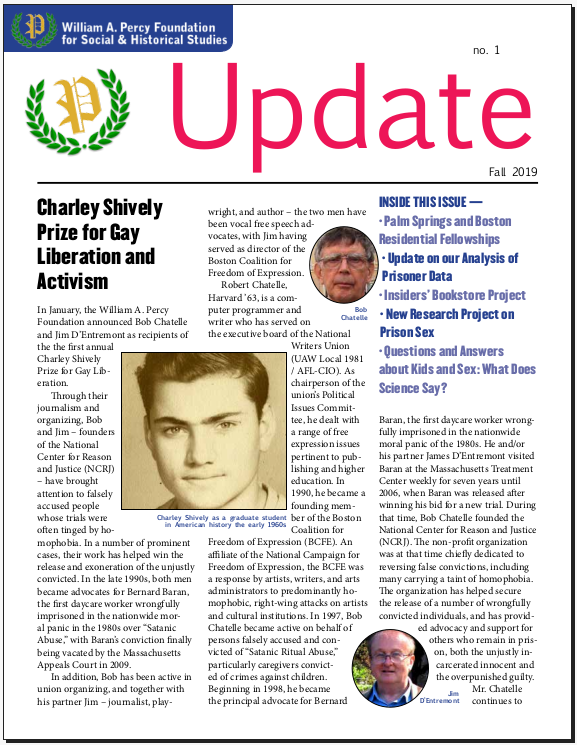 The William A. Percy Foundation for Social and Historical Studies is an IRS-approved tax-exempt organization incorporated in the State of Delaware and licensed to do business in the State of California. The purpose of the Foundation is to support scholarly research and public education that promotes better understanding and greater tolerance of human sexual diversity. Projects eligible for support will include, but need not be limited to, awards recognizing outstanding scholarship or activism, academic conferences, public lectures, subvention of scholarly or journalistic books, articles, and films, translation of existing publications into other languages, creation and maintenance of websites or other electronic media, interviews and quantitative surveys of non-clinical populations, travel to conduct or present research at libraries, archives, or conferences, and advertising to promote public awareness of sexual minorities and their cultural contributions. In selecting award recipients the Directors of the Foundation shall give special consideration to qualified individuals who lack permanent academic positions and can demonstrate financial need.

Regulation of sexuality in the West increasingly occurs under conditions of institutionalized moral panic and a “state of exception” (power without limits that states often arrogate in war or crisis). Second only to terrorism, regulation of sexual behavior and identities – especially in the Anglosphere – drives today expansion of state power to surveil, control, and punish individuals and restrict expression beyond longstanding liberal restraints. Driving these developments are sometimes descendants of left social movements that had successfully expanded liberal principles to the domains of gender and sexual regulation. Other times the drivers are rightist reaction to the transformations thus wrought. Both together have served as a ratchet, dismantling centuries-old cornerstones of Western governance based in ideals of individual autonomy, privacy, fairness, and free expression: ideals treasured not as grounds for license but prerequisite for nurturing free, responsible individuals.

The William A. Percy Foundation works to call attention to the erosion of foundational Western safeguards for freedom and fairness in sexual governance and marshal relevant evidence and analysis from the social sciences and historical research.

In selecting projects, the Directors of the Foundation shall give the highest priority to those that study, in a non-judgmental and compassionate manner, sexual minorities and practices that tend to be marginalized or ignored by mainstream scholarship and media.

In addition, the Foundation may accept donations of books, documents, and visual materials for the use of qualified researchers who support the Foundation’s goals of sexual freedom and liberation or for redistribution to incarcerated individuals who lack access to adequate library resources, but it shall expend resources on acquiring such materials only in very exceptional cases.

The Foundation shall not support any projects that advocate or provide instruction in violating the laws of the United States or any state thereof. It also shall not endorse any specific proposed legislation or candidates for political office.